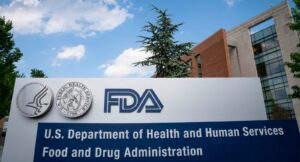 A sign for the Food And Drug Administration is seen outside of the headquarters on July 20, 2020, in White Oak, Maryland.

The FDA published 13 of the 23 guidance documents planned for 2022, with most, 10, coming from the A-list. Still, the lighter publishing schedule compared to last year, when the FDA proposed 10 draft guidance documents on its A-list, means most of the top priorities in 2023 are left over from 2022.

In the coming fiscal year, the regulator plans to publish draft guidance on voluntary malfunction summary reporting, clinical considerations for medical device premarket submissions targeting opioid use disorder and select updates for guidance for the breakthrough devices program. All three proposals also featured on the FDA’s A-list for 2022. The only newly proposed draft guidance on the A-list covers an electronic submission template for de novo request submissions.

In addition to publishing the four draft guidance documents, the agency plans to finalize seven texts that have already reached the draft stage. The list of A-list documents scheduled for finalization include texts on managing cybersecurity and the agency’s guidelines for companies to transition to full FDA approval from pandemic-era EUAs that allowed the swift application of many tests, vaccines and treatments used to combat COVID-19.

The B-list for the coming year features six proposed draft guidance documents, only one of which was on last year’s list. The previously proposed document covers marketing submission recommendations for a change control plan for artificial intelligence-enabled device software functions. The new FDA proposals cover topics such as chemical analysis for biocompatibility assessment and the evaluation of sex-specific and gender-specific data in medical device clinical studies.

Officials also plan to perform a retrospective review of guidance documents that were finalized in 1993, 2003 and 2013. The review covers around 30 documents, including the FDA’s guidance on premarket notification submissions for pulse oximeters. The regulator has convened an expert panel to discuss pulse oximeters amid concerns that they can delay care by giving faulty readings for dark-skinned patients.

The FDA is seeking feedback on the relative priority of the documents on its A-list and B-list, as well as suggestions about which guidance texts it should revise or withdraw as part of its retrospective review.