As camera and machine learning technologies mature, a first-of-its-kind technology allows anyone to quickly and accurately analyze a meal for a detailed nutritional and sustainability profile. Individuals as well as providers in weight loss, fitness, pharmaceutical development, healthcare, electronic medical records, and prepared foods stand to benefit from clear and objective, real-time nutritional information.

An Objective Perspective on Food 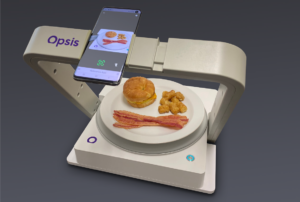 Headquartered in Golden, CO, Opsis Health is a team of technology, nutrition, fitness, and business visionaries dedicated to revolutionizing the health of people and the planet through technology. Through their proprietary software and platform, the Global Nutrition Project, Opsis leverages artificial intelligence to quickly and easily identify the nutritional makeup of any food in real-time. The Global Nutrition Project aims to mitigate three of the top issues of our time: the prevalence of obesity, the rising cost of healthcare, and the immense impact our food system has on the environment.

In order to provide a real-time analytic solution, Opsis tookadvantage of modern technologies including sensor fusion, machine learning, and cloud-based applications.Opsis developed a consumer appliance, called the Opsis IQ, which when a mobile phone is attached, works to train a cloud-based library and machine learning algorithm for nutrition tracking. The Opsis IQ is a mechatronic device that weighs a plated meal and guides the three-dimensional visual scan of the meal using the user’s mobile phone in a consistent and repeatable way.

Opsis engaged Naprotek in the development of the Opsis IQ to perfect the design for production. Specifically, Opsis needed a manufacturing partner for the Opsis IQ to establish manufacturing processes, refine the design, and to produce an initial batch of units for testing and evaluation by their industry partners. Naprotek was tasked with establishing a manufacturing workflow and to workcollaboratively with Opsis engineers to recommend design changes, component alternates, assembly process modifications, in-circuit and functional testing, and packaging. From hand assembly and manual processes around the printed circuit board assemblies (PCBA), to system assembly and testing, Naprotek’s goal was to stabilize the design of the Opsis IQ and to establish production processes in a scalable way.

Using Design for Manufacturability (DFM) principles, Naprotek identified key opportunities in the Opsis IQ bill-of-materials (BOM) to document, formalize, and reconcile component selection and assembly instructions. A pilot build is a key point in product development to work out performance concerns to prevent them from causing potential failure modes in production units. Naprotek’s electronics manufacturing experts scrutinized every assembly step in the production of the Opsis IQ in order to identify areas where the electrical or mechanical integrity of the system could be compromised.

Being a dynamic product, the Opsis IQ has a motor and transmission that swings the arm that securely holds a user’s mobile phone during a scan. Having moving parts presents unique challenges, such as in securing connectors between printed circuit board assemblies (PCBAs). As Naprotek’s staff conducted burn-in testing of units, it was quickly discovered that the simple addition a dab of hot glue in select areas can ensure signal integrity and system reliability during the scan cycle.

Often, many potential failure points aren’t found until final testing. Functional testing can guide low-cost decisionsthat ensure products perform reliably and prevent the need for refurbishment and repair. One example of a mitigated risk is the identification of a structurally weak epoxy application intended to prevent backlash from the motor arm of the device. By changing the securement method to a permanent weld between the clutch and the shaft, a potential field failure mode was eliminated. These are just some examples of how the partnership between Naprotek and Opsis led to robust and reliable prototypesthat are well-positioned for optimization, volume production, and market launch.

“Thanks to Naprotek for building our Opsis IQs to such exacting standards!  The pilot units have been outstanding.  We know that your attention to detail and an inclination to go beyond the “good enough” has been instrumental in producing a great product,” said Kevin Grundy, Chief Executive Officer, Opsis Health.

Through the development of the Opsis IQ, combined with the library and engine of the Global Nutrition Project, Opsis designed an end-user solution for people to track their nutritional intake quickly and accurately by imaging their meals in a matter of seconds. As their technology becomes adopted by providers and servicers, they’ll start enabling people to live fuller, healthier lives by showing them the impact the foods they eat have on their bodies and the world. As demand increases, there will undoubtedly be opportunity to optimize the Opsis IQ for cost-savings based on high-volume production and Naprotek stands ready to build the partnership as Opsis grows.