Whether in aerospace technology, medical electronics, e-mobility and automotive, power electronics, LED production or in the aerospace & defence sector – the areas of application for reflow soldering are diverse. Electronic components only function in end devices thanks to high-quality soldering of the electronic contact points. But what if the components on the circuit board are very large or of high-mass? Or if vacuum soldering processes need to be realised inline? This is where the efficiency of condensation soldering (vapour phase soldering) stands out, for example with the Condenso series systems from Rehm Thermal Systems. The heat transfer is up to ten times higher than with convection soldering, so even large, high-mass boards can be reliably processed in a stable atmosphere and with the added advantage of our innovative vacuum technology. 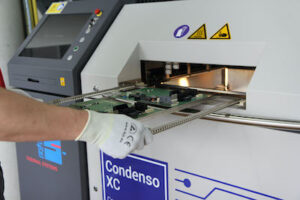 Vapour phase soldering is not a new invention, but with Rehm’s patented systems within the Condenso series, a greater range of flexibility is provided for the soldering process than can be achieved with other more conventional methods. The usage of an injection principle and the control of the temperature, injection quantity, number of injections and the pressure (vacuum) facilitates more precise and more diverse reflow profiling. The soldering process takes place in a hermetically sealed process chamber.

With condensation soldering, a film of liquid builds up with the aid of the heat-conducting medium, Galden®, which is distributed throughout the entire process chamber and surrounds the whole assembly and evaporates. The vapour condenses for as long as the assembly takes to reach a soldering temperature of between 240 and 260 °C. Galden® is perfluoropolyether, a liquid polymer that consists of carbon, fluorine and oxygen. Rehm uses the patented injection principle to achieve better control of the condensation phase. In the process, exactly the right quantity of Galden® is added at the correct time. With this procedure, the latent heat that is released during the change in state of the medium from its vaporous form to a liquid is then used to warm up an assembly evenly and constantly. Galden® is a self-limited medium. This offers additional safety as the components cannot overheat.

This condensation principle with vacuum has proven to be extremely efficient and reliable in practice. Due to the increased demand for high-performance electronics and safety-relevant electronic components, a vacuum soldering process is increasingly sought after. The vacuum technology of the Condenso is therefore used in an extremely varied range of processes. Reflow soldering reduces oxidation and increases solder joint reliability by reducing voids. This results in soldering points with a surface bonding percentage of up to 99%. In addition, a vacuum can already be drawn during the heating phase before the actual soldering process. This facilitates not only a more even distribution of the Galden® vapor in the process room but also the degassing of solvent and moisture from the soldering paste. Furthermore, in addition to the temperature, the atmosphere can also be varied over the entire time in the process chamber.

The range of condensation soldering systems from Rehm Thermal Systems has been continuously expanded due to market requirements. Thus, the customers of Rehm now have access to optimised production equipment for the condensation soldering processes. The flexible system variants of the Condenso smart series can be integrated in an extremely broad range of production environments. Regardless of whether you require batch operation, inline connection or soldering in the run-through process, Rehm provides maximum process reliability for all areas!

As a specialist in the field of thermal system solutions for the electronics and photovoltaics industries, Rehm is a technology and innovation leader in the modern and economical production of electronic modules. As a globally operating manufacturer of reflow soldering systems with convection, condensation or vacuum, drying and coating systems, functional test systems, equipment for the metallization of solar cells as well as numerous customer-specific special systems, we are represented in all relevant growth markets and, as a partner with 30 years of industry experience, we implement innovative manufacturing solutions that set standards.